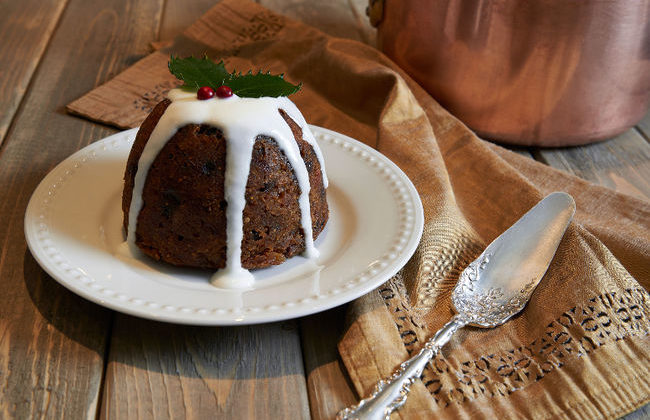 KINGSTON – I grew up in a household where the plum pudding was not just a dessert but an all-important Christmas ritual. On “stir-up Sunday,” the last Sunday before Advent, typically the last Sunday in November, my mother assembled the ingredients for her puddings, which included a small mountain of dried fruit, brandy and several dimes and silver sixpence. The whole family were called upon to stir the pudding mixture and make a wish. Then there was the cheesecloth and pudding basins and the practically ceremonial steaming of the puddings.

For the month of December, the precious puddings were stored in the dark cool of the basement until Christmas Day when the pudding was brought out, re-steamed, and served set aflame for dessert, accompanied by rum butter. The latter was my absolute favourite part of Christmas dinner. It still is. And you can’t have rum butter without Christmas pudding. My father’s rules.

I belonged in the do-not-love Christmas pudding camp, amongst all those others who believe that the Christmas pudding (also known as plum or figgy pudding) should quite rightly be set afire, and then preferably left to burn to ashes. The same for fruit cake and haggis and other similar foods, all best saved for an apocalypse.

But my father was having none of that. “You’re too young for likes and dislikes,” he’d say, so I ate the Christmas pudding, liberally topped with my mother’s fabulous, decadent rum butter.

In time, I came to love plum pudding, fruit cake and, yes, even haggis, adding credence to my father’s argument that I probably was too young to have likes and dislikes.

Plum pudding has its roots in medieval English cooking, when there were few ways to preserve other than drying, salting or fermenting. Dried fruits, including raisins, prunes, figs, currants and apricots, were an important commodity in a time when sugar was an expensive luxury item and you could not simply run to the refrigerator or store for supplies. Dried fruit served as a preservative of sorts in many households, where the only sugar to be had was that contained in fruits.

In its earliest origins, plum pudding contained ground meat as well as suet, grains, spices, salt and whatever dried fruits were on hand. This mixture, a cross between sausage and haggis, would have been encased in animal bladders or intestines for storage. Only later, when sugar became more commonplace, did the more contemporary version of plum pudding (sans meat) make an appearance. The same is true for mince pie.

Plum pudding’s noble lineage was cemented in 1714, when a German from Hanover became the King of England. King George I, also known as the Pudding King, is said to have requested plum pudding for his first Christmas dinner in England. German-speaking George was an unpopular king when he initially arrived, speaking very little English. But he had one particularly endearing characteristic: he loved food and sharing it with others. He was the first king to be seen dining in public places and he held massive feasts and balls at Hampton Court, sometimes several times a week, using food and alcohol as a way to win over the British.

In that same year that King George I came to the throne, 1714, the earliest known plum pudding recipe appeared in Mary Kettilby’s A Collection of above Three Hundred Receipts in Cookery, Physick and Surgery.

By the Victorian era, plum pudding was a firmly entrenched British Christmas tradition. It had the virtuous benefit of being an egalitarian dish because although cast iron stoves had begun to appear in the most affluent households, the plum pudding being steamed and not baked, did not require the luxury of owning an oven.

In 1927, the British Empire Marketing Board wrote to the Royal Household, requesting a copy of the Royal Family’s Christmas pudding recipe. The recipe was scaled back and ingredients from each of the colonies was included: brandy from Cyprus, nutmeg from the West Indies, Australian currants, South African raisins, Jamaican rum, English beer and Canadian apples. Thousands of copies of that recipe were circulated, making the plum pudding popular all over again.

I think my mother would be happy to know that I’m carrying on the Christmas pudding tradition even though I don’t make my own pudding. (I do, however, make my mother’s rum butter and the recipe is on this page.)

This year, instead of making the pudding, I have a beautifully boxed King George Christmas Pudding made by The Art of Pudding, a Toronto-based company owned by food entrepreneur Michelle Chandler.

Chandler has already done all the work, including developing the perfect recipe, gathering the lengthy list of ingredients, and prepping and steaming the puddings for four hours. The boxed one-pound puddings contain, among other things, raisins, currants, apples, dried figs, candied peel, cherries, dried apricots, mango and pears, and brandy. The puddings can be lightly re-steamed on the stove top or warmed in the microwave. A recipe for hard sauce is included. The puddings can be purchased in Kingston at Cooke’s Fine Foods (check website for other locations throughout Canada) or ordered online and shipped anywhere. A perfect holiday gift for any foodie on your list.

For more information, go to theartofpudding.com.

Lindy Mechefske is the award-winning author of Sir John’s Table and A Taste of Wintergreen. You can find her blogging about her adventures in the kitchen at lindymechefske.com.

Using a hand-held mixer, beat the butter and brown sugar for several minutes. Add the rum, slowly, and keep beating until it is fully incorporated. Store in a sealed glass jar in the refrigerator. If the rum separates, don’t worry, just give it a good stir prior to using. Serve with plum pudding, mince tarts, apple crisp or a tart apple pie.