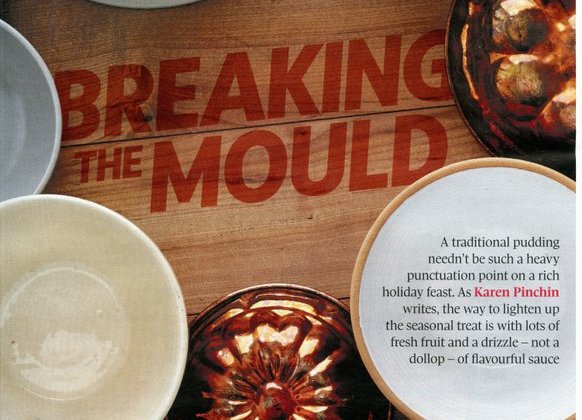 A traditional pudding needn’t be such a heavy punctuation point on a rich holiday feast. As Karen Pinchin writes, the way to lighten up the seasonal treat is with lots of fresh fruit and a drizzle – not a dollop – of flavourful sauce

Four luscious puddings that will turn your holiday menu upside down

Dense and decadent, redolent of booze-soaked dried fruit and fragrant citrus peel, the Christmas pudding is arguably the ultimate holiday dessert. In Britain and much of the Commonwealth, where festive puddings shaped in copper forms and stoneware mixing bowls have been a holiday staple for centuries, the dish was traditionally prepared months in advance and allowed to mellow as ingredients intermingled, preserved by large amounts of brandy, sugar and beef fat. Some families took turns mixing the batter and making a wish, after which a silver coin or trinket would be added, with the finder winning luck for the year. (In The Adventure of the Christmas Pudding, Agatha Christie’s Hercule Poirot found a silver bachelor’s button, which guaranteed the unmarried detective another year of unsurprising singledom.)

But unlike brick-like fruitcake, which is generally more batter than fruit, the best pudding sports a ratio of equal parts fruit and nuts to batter and a moist, nuanced crumb. Its texture is aided by a process of steaming and an aging period of hours to months.

“You’d never serve a pudding fresh from the oven,” says Michelle Chandler, a former business consultant who started producing and selling her own puddings under the brand name The Art of Pudding last year. For decades, she has served one – doused with brandy and set alight tableside in a dim room, its blue flame licking the edge of the plate – as the pièce de résistance of every Christmas feast.

“It’s such a comfort food,” she says. “It’s warm, has good mouth feel and [boasts] such depth of flavour. I was trying to capture the dark, luscious puddings I remember eating as a child. I couldn’t give a hoot about the rest of Christmas dinner. Bring me the pudding.”

For modern tastes, says the food stylist and recipe developer Michael Elliott, beef fat won’t cut it, nor the obscene amounts of sugar found in some heirloom recipes. That’s why, when imagining a slew of updated puddings for this story (including a surprising savoury version), Elliott used lots of fruit, both fresh and dried, decoratively and, more importantly, in the batter. “That’s a great way to have a sinful dessert but also maintain lightness,” he says. In the case of his “traditional” pudding, Elliott even eschewed heavy winter spices for citrus peel, almonds and fruit soaked in brandy and port.

Conventionally served with a sugar-laden “hard sauce” (a potent mélange of butter and booze) or eggy custard, another way to lighten the load is to serve pudding with crème fraîche or whipped cream, Elliott says. “That will give you the dairy content without going for the 45 per cent milk fat.” Chandler agrees, although she points out that diners should probably just save room for one final, decadent course. “My pudding is never going to be a health food,” she says, laughing.

Last year, her first in business, she sold out 2,200 puddings before December; this year, she has nearly doubled her production to about 4,000. “There was an American president who said there should be a chicken in every pot,” she says, referring to Teddy Roosevelt. “I think that everyone should have a pudding.”

The key to cooking a perfect pudding is mastering your steaming technique. The instructions below can be applied to most recipes, including the four sweet options featured.

Preheat oven. After pouring your pudding into a pudding basin or heatproof bowl, crumple and wet a piece of parchment paper, then spread it flat. Place the parchment atop the filled pudding vessel. Cover with a piece of aluminum foil. Secure the foil and parchment with butcher’s string.

Place the pudding in a Dutch oven or deep heatproof container. Place in the oven, then fill the outside vessel with boiling water until it reaches halfway up the sides of the pudding basin. Cook as directed.